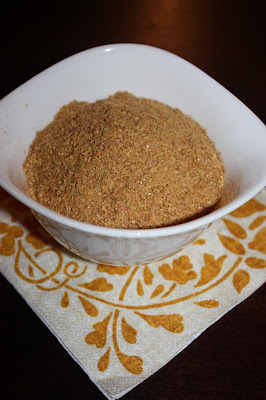 Ah, yes... New Year’s Resolutions. A tradition that invokes everything from delight to resignation, has a success rate akin to winning the lottery and has the power to launch feelings of guilt, failure, and dark humor in a flash. And yet every year, millions of us are drawn to the ritualistic hope of achieving some magical outcome as if, perhaps, FINALLY, we will triumph over a stubborn habit or fear that has resisted our most sincere efforts in years past.

But, alas, the annoying reality is that the payback for this year’s toil will probably be no different than last, or the one before that (sigh). Research over the years has concluded that about 80% of all New Year’s Resolutions are broken by January 31st. If that resolution had something to do with health and fitness, 90% will be history by January 15th. By the end of the year, less than 5% of us will have persevered with our resolutions intact (mildly depressing!). No wonder there are so many people who don’t take this annual ritual seriously to begin with.

Knowing that I wanted to beat the odds, I wanted to challenge myself with something I knew I could do. As I have recently noted, it is simply impossible for me to stay away from sugar so the idea of giving it up as a means of losing weight was out of the question for me. I was, however, willing to adjust some of my eating to include more nutrients in my diet. Thus, I bought a box of flax seed. That box was going to be the beginning of a new journey for me. That box represented a new year, a new me.

Flax seed is really good for you. “It may be tiny, but it’s mighty: The flax seed carries one of the biggest nutrient payloads on the planet. And while it’s not technically a grain, it has a similar vitamin and mineral profile to grains, while the amount of fiber, antioxidants, and Omega-3 fatty acids in flax leaves grains in the dust. Additionally, flax seed is very low in carbohydrates, making it ideal for people who limit their intake of starches and sugars. And its combination of healthy fat and high fiber content make it a great food for weight loss and maintenance -- many dieters have found that flax seed has been a key to keeping them feeling satisfied.” Perfect! This is something I want in my diet and especially something I want to be apart of my New Year’s Resolution. I had found what I was looking for.

The wonder of flax is that you can add a tablespoon to your oatmeal for breakfast or the batch of muffins you're making for your afternoon tea or a meatloaf for dinner. There won't be a difference in flavor and you'll know that you're getting an abundance of nutrients.

So, determined to be "healthier," one morning I faithfully opened my brand new box of flax seed and added a tablespoon to my typical breakfast of yogurt, cottage cheese and fruit.

To date, that was the worst breakfast I have ever had. I practically had to plug my nose (which reminded me of a horrible cleanse I once did... well, attempted - I don't think it counts if the cleanse only lasted for the morning) while I ate these so called healthy mixed grains and nearly gagged with each bite. I couldn’t drink my coffee quickly enough after each bite reminding myself of the omega-3 fatty acids, fiber, vitamin B and magnesium I was providing for my body. Persevere. Persevere. Persevere. Blah.

Later that day I was explaining my predicament to my mom who’s a huge advocate of flax.

It was determined (thanks to my wonderful mother and Google) that I ate rancid flax seed.

My rancid flax has been tossed and just the thought of it makes me cringe and my arm hairs stand on end. It is most likely that I won’t have a box of flax seed sitting in my pantry anytime soon.

If you’re looking to buy or consume flax in the near future my advice to you is smell it. I’m told it has a gentle nutty aroma and even though I did smell it and it smelled horrible, I ate it. If it smells bad don’t eat it. Save yourself. If you have good flax, store it properly.

So, as another year passes it looks like another one of my New Year’s Resolutions hasn’t made it; I’m in the dreaded 80% and have 11 months to wait until I start this whole process over.

I have a feeling 2011 will hold great things for me as I’ll hopefully be able to eat flax again and maybe bake those cranberry flax muffins I was eyeing.
Email ThisBlogThis!Share to TwitterShare to FacebookShare to Pinterest
By Mary @Delightful Bitefuls 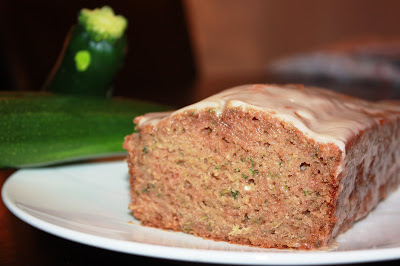 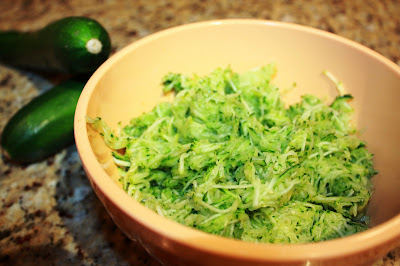 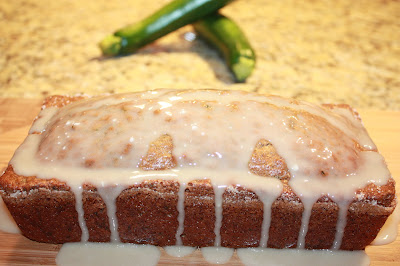 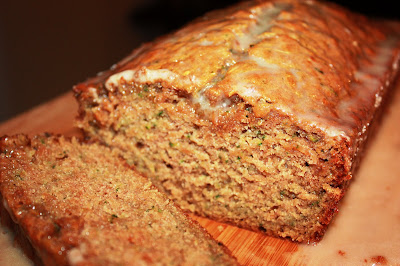 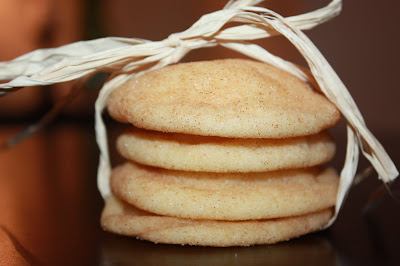 What are Snickerdoodles and why had I never heard of them?!

My husband has been on the receiving end of a lot of baking and he (and his co-workers) have collaboratively agreed that these cookies are a definite favorite.

Snickerdoodles could mistakenly get referred to as sugar cookies. The difference between the two comes from the use of cinnamon, which is balanced with cream of tartar to give the cookies their sweet, spicy flavor.

I must admit, I didn't expect for these cookies to be such a hit. They are so simple yet so delicious.

Consider yourself warned, these Snickerdoodles are extremely addictive!

In a medium bowl, mix the flour, baking soda, cream of tartar and salt; set aside. In another bowl, cream the butter, shortening and 1 & 1/2 c sugar. Blend in the eggs at low speed. Add the flour mixture, and mix until combined.

In a small bowl, combine the remaining sugar and cinnamon. Roll 1 tbsp of dough into a ball and roll in the cinnamon-sugar mixture. Place dough on cookie sheet, 2 inches apart.

Bake for 8-9 minutes. Do not overbake - the centers will be soft, but will set upon cooling. 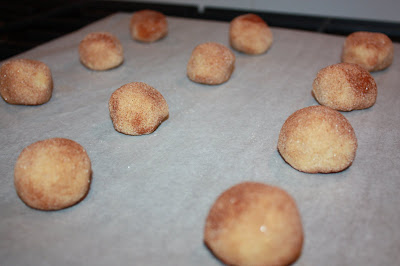 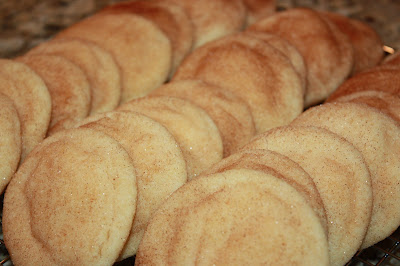 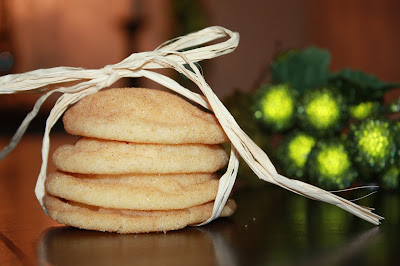 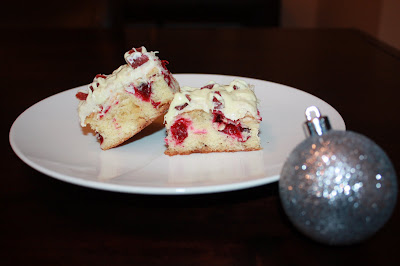 Cranberries are quickly becoming one of my new favorite Christmas baking ingredients!

Not only do cranberries add a jolt of color and flavor to holiday tables, but these savory ruby jewels are more than seasonal fancy.

A study found that cranberries have more antioxidants than almost any other fruit, offering protection against heart disease, cancer, and the effects of aging (how's that for your daily trivia?!).

I don't know about you but that's enough reason for me to want to bake with cranberries - just think about how good we are being to our bodies!

The tangy cranberries mixed with the white chocolate and cream cheese icing in this recipe makes for a perfect treat - for breakfast, lunch or dinner... or all three ;-)

I froze a bag of cranberries (which I highly recommend doing as we only get fresh cranberries for a short period of time) so that I can make them again in the new year. I know I won't be able to wait until next Christmas to make these again!

Bake for 35-40 minutes or until golden brown and a toothpick inserted into the center comes out clean. Cool before spreading frosting.

Mix all of the frosting ingredients together and spread a thin layer over the cooled cake. Immediately sprinkle with the chopped dried cranberries. 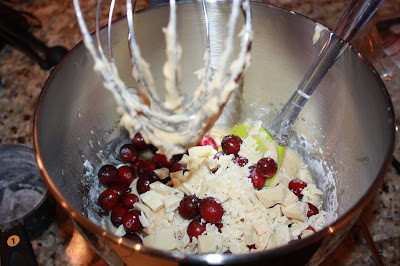 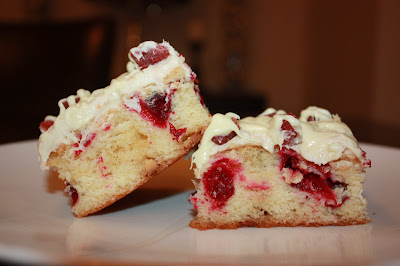