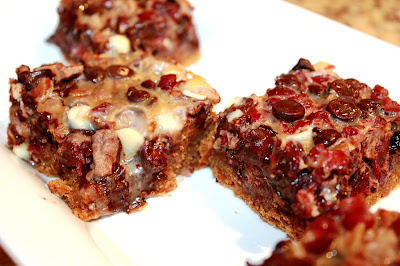 These bars live up to the adage that squares are the easiest of all to make. This recipe involves three main ingredients: chocolate, cranberries and pecans. Yum! The result? Rich, sweet and absolutely delicious squares. These seemed to taste better after a day or two in the refrigerator - although, I like to warm mine up in the microwave before eating

Preheat oven to 325°F. Line the sides and bottom of a 9 inch square baking pan with parchment paper.

For the top layer mix together:

Spread on top of the prepared base and bake at 350°F for about 25 minutes. Cool completely before cutting into squares and serving. (Obviously, I couldn't wait that long for them to cool and preferred the squares warmed up in the microwave the following days day). 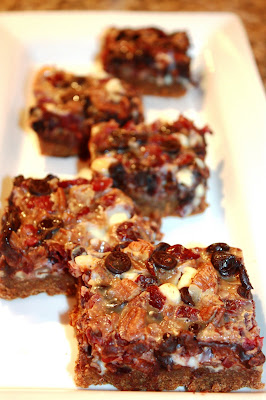 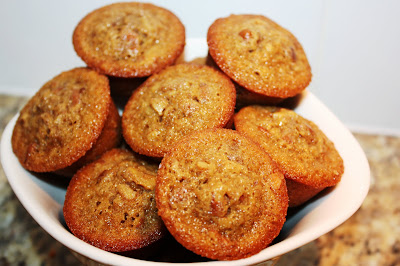 You have to try these. There are only five ingredients and they do taste like pecan pie!

Now you have no excuse not to have any baked goods for company on short notice.

I bet you can't eat just one!

In a medium bowl, mix all of the ingredients together. Spoon the batter into the muffin cups evenly.


Bake for 17-19 minutes. The edges will be crispy. Do not overbake. Remove the muffins and cool on a wire rack. 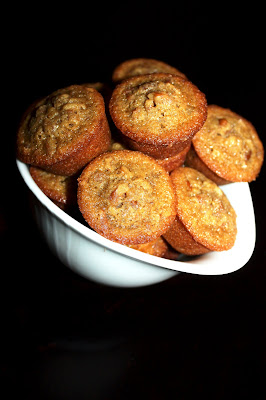 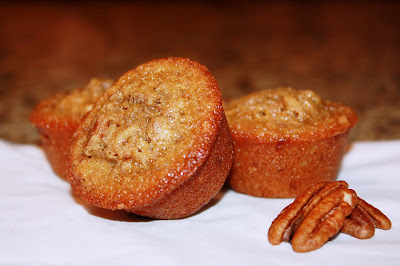 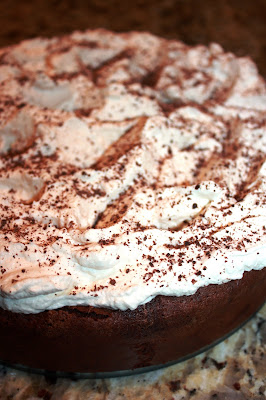 So, I missed Chocolate Cake Day but knowing that Valentine's Day was right around the corner I knew not to fret!

This flourless cake is crammed with chocolate (use only the best) is rich with butter and will fall slightly as it cools. The center is filled with softly whipped cream and sprinkled with cocoa powder — intensity, then relief, in each bite.

Each bite will have you on Cloud 9!

Preheat the oven to 350°F. Line the bottom of an 8-inch springform pan with a round of wax paper; do not butter the pan.

Melt the chocolate in a bowl set over hot water (double boiler). Remove from the heat and whisk in the butter until melted; set aside.

In a bowl, beat 2 whole eggs and the 4 egg yolks with 1/4 cup of the sugar just until blended. Gently add the warm chocolate mixture, the optional Cointreau (or Bailey's) and orange zest (I added these and recommend doing so).

In another bowl, with an electric mixer, beat the 4 egg whites until foamy. Gradually add the remaining 3/4 cup sugar and beat until the whites form soft mounds that hold their shape but are not quite stiff. Stir about 1/4 of the beaten egg whites into the chocolate mixture to lighten it; gently fold in the remaining whites. Pour the batter into the pan; smooth the top but leave the air bubbles.

Bake until the top of the cake is puffed and cracked and the center is no longer wobbly, usually 35 to 40 minutes. Do not over bake.

Cool the cake in the pan on a wire rack; the cake will sink as it cools, forming a crater with high sides.

At serving time, whip the cream with the confectioners’ sugar and vanilla until not quite stiff. With a spatula, carefully fill the crater of the cake with the whipped cream, pushing it gently to the edges. Dust the top lightly with cocoa powder. Run the tip of a knife around the edges of the cake; carefully remove the sides of the pan and serve.


Happy Valentine's Day! I'm lucky enough to have the sweetest valentine of them all :) 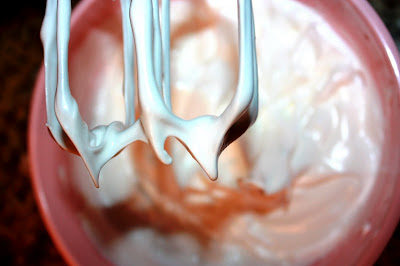 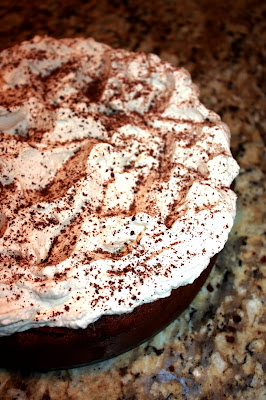 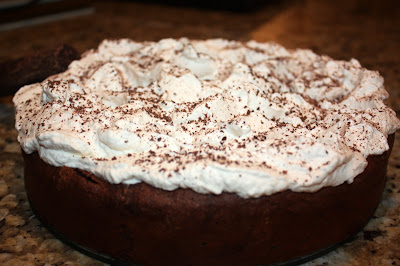 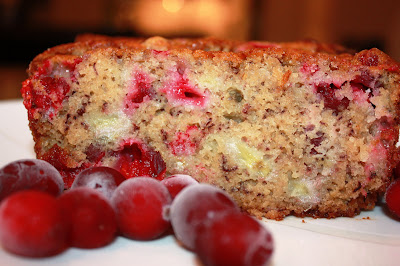 The batter for this loaf was very easy to assemble, and by the time the bread was done, the aroma in our home was what I’d like to think is a heavenly scent.
I love how this recipe calls for slices of banana rather than smooth banana. This allowed larger pieces of banana to set in the loaf - yum! I’ve mentioned the nutritional benefits of cranberries but we don’t want to sell bananas short on all their goodness. Bananas are a great source of fiber and vitamin B6 and because bananas are loaded with potassium and considered a great post-workout snack this is all the more reason to eat this after an intense exercise at the gym – and sadly could be used as a reason to justify why my husband and I finished this in one day (shame on us)!
This loaf turned out to be delicious; not too sweet, with the tartness from the cranberries well balanced by the stable banana taste. It was baked just right, nice and moist, with a slightly crispy outer crust. The slices also looked incredibly appetizing, with pretty cranberry red freckles in the brown and white cake. You could also substitute other berries for the cranberries, as they're not so easy to find.
After greasing my loaf pan I coated the pan with a cinnamon and sugar mixture for the crust. It's an extra touch that makes this bread so sweet. I suggest leaving this loaf in for the recommended time. I checked my loaf at 40 minutes and the toothpick came out clean but the middle was not done. Use your best judgment and enjoy this delicious and nutritious flavor filled cranberry banana bread!
Cranberry Banana Bread
Adapted from: The Wilson Farm Country Cookbook
Ingredients

Cream the butter and sugar together. Add in the eggs one by one, mixing well between each addition. Add in the banana slices, the cranberries, the water and the vanilla extract. Mix again until blended, but not too much; it's nice if the banana and cranberries are not completely mushed.

Sift together the flour, baking powder, baking soda, salt and cinnamon. Add the dry ingredients into the batter, and mix until just combined - do not overmix.

Pour the batter into the pan and bake for 50-55 minutes or until the top of the cake is nicely browned and a cake tester comes out clean.

Let rest for ten minutes, then run a knife around to loosen the sides, and turn out on a rack to cool completely. 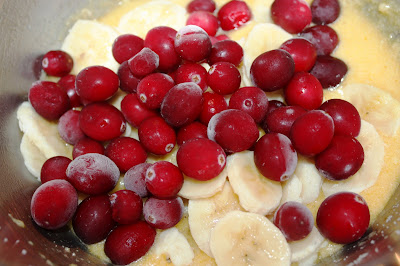 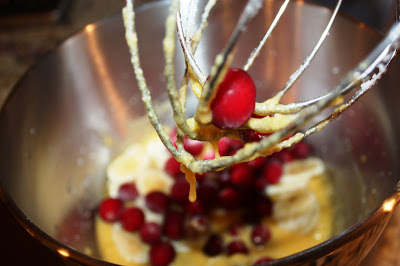 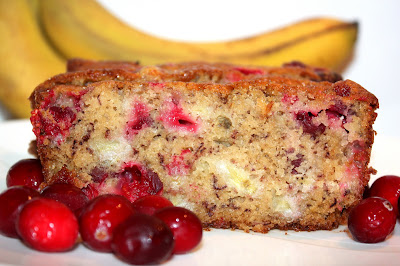 A guy took his girlfriend to her first football game. Afterward he asked her how she liked the game.
'I liked it, but I couldn't understand why they were killing each other for 25 cents,' she said.
'What do you mean?' he asked.
'Well, everyone kept yelling, 'Get the quarter back!'
Note: This post is suitable for woman or anyone else who wishes to gain a (very) basic understanding of the Super Bowl. And of course, to make things interesting, this is written from the perspective of a woman who knows nothing about this sport.

As Super Bowl Sunday inexorably draws near, I find myself in the familiar, annual arguments with my football fan friends; the Saints vs. Colts debate.

Okay, so this might be a lie (and a rather large one at that). On the contrary, I am the one standing there, nodding politely, pretending to have the very slightest of idea as I listen to you juggling the stats and talk about formation and strategy. To be frank, if I wasn't relentlessly being reminded of the Super Bowl by the news, radio and my darling husband this day would merely pass me by.

Initially, I must admit, it was an upsetting realization to discover that the Super Bowl wasn't about soup, a bowl or shoes (shoe-per bowl). Rather, it was to my disappointment that I learnt that all of this hype was surrounding a game where big husky men fight over a leather ball and more specifically do it for a measly quarter.

Knowing that I want to earn my place on the barstool this year (and that I don’t want to be banned from the living room entirely for asking too many questions) I knew that I’d have to have at least a general idea why to yell, when to yell and at whom.

So, to those of you who are interested and like me only know that the teams are named after angels and animals, that there is a concert in the middle of the show (game, whatever) and that Carrie Underwood is singing the National Anthem (love her) here are the essentials of this game

Football is a battle between two teams, with each team striving to score more points than the other by advancing a ball made of pigskin; it is a game based on selfish motives: every player wants the ball, every team wants to win, and no one ever feels sorry for the pig.

While continuing my research I kept coming across words like airing it out, interception, fumble, punt (::got bored, started looking at baking recipes::) nickel defense, rush, tackle and blitz. Yawn.

All of this and I can say that I’m no farther ahead (okay, it’s not like I did hours of research). It looks like I’ll be resorting to my old ways. As I have a tendency to do with most sports (I like to watch and at least attempt to be a supportive wife), I'll likely choose the team I want to win by the color of their jersey, the best fan team spirit and in this case (one of the few perks of football), the dancing by their team’s cheerleaders.

I think it is safe to assume that I won’t be sitting on the barstool this year. Maybe next year…
Email ThisBlogThis!Share to TwitterShare to FacebookShare to Pinterest
By Mary @Delightful Bitefuls 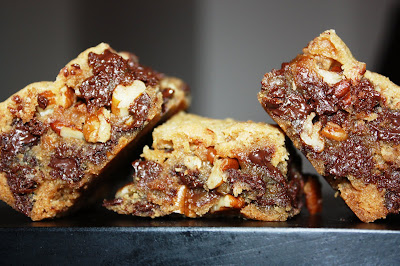 I love to be creative in the kitchen and don't often bake the same thing twice but this recipe keeps me coming back. These simple ingredients produce a rich and chewy cookie with caramelized edges. So, if you're like me and love a cookie in any shape, size or form, this recipe is for you; and like any faithful chocolate chip cookie recipe, it won't let you down.
Cookie Cake
Adapted from: Mrs. Fields Cookie Book
Ingredients
2 cups all-purpose flour
1/2 teaspoon baking soda
1 cup dark brown sugar, firmly packed
1 cup salted butter, softened
1 large egg
2 teaspoon pure vanilla extract
1 cup chopped pecans
1 1/2 cups semisweet chocolate chips
Directions
Preheat oven to 300°F. Grease an 8-by-8-inch baking pan.
Combine flour and baking soda in a medium bowl. Mix well with a wire whisk. Set aside.
In a large bowl use an electric mixer to blend the sugar and butter. Add egg and vanilla, and beat at medium speed until light and smooth. Scrape down the sides of the bowl, then add the flour mixture, pecans and chocolate chips. Blend at a low speed until just combined. Do not overmix.
Transfer batter into the prepared pan, and level top with a rubber spatula. Bake in center of oven for 35-45 minutes or until toothpick comes out clean but center is still soft. Cool on rack to room temperature.
Email ThisBlogThis!Share to TwitterShare to FacebookShare to Pinterest
By Mary @Delightful Bitefuls