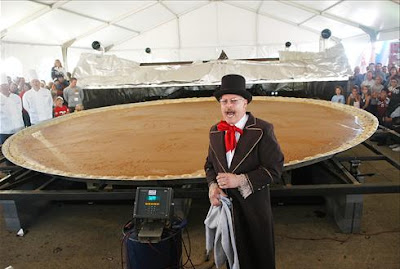 This is the world’s largest pumpkin pie, certified by Guinness World Records.

The massive pie took over thirteen hours to bake in a specially made oven. Crews began actually baking the pie at midnight on Friday. They gave it about two hours to cool on Saturday before weighing it and splitting it up into roughly 5,000 slices to feed the hungry crowd.

Some crazy stats about this pie...

Ingredients include:
Largest Pumpkin Pie
Did you know?

The canned pumpkin market is worth $141 million in the U.S., but about 80% of those sales come in the last three months of the year, according to research group IBIS World.